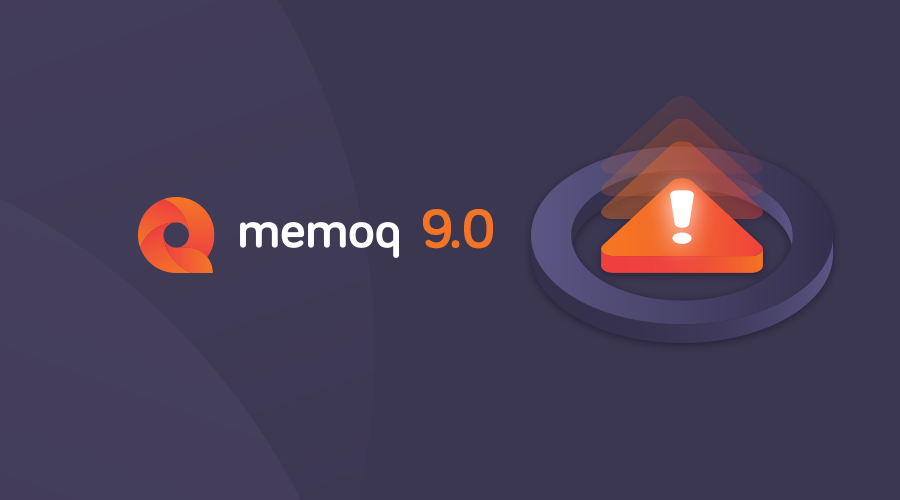 Before the arrival of memoQ 9.0, we inform you about the most important technical changes in relation to the newest release. This page provides information for individuals and companies using memoQ (including both the translator pro and project manager editions) and memoQ server.

memoQ and memoQ server 7.8 will no longer be supported after the release of version 9.0

memoQ and memoQ server 7.8 have been supported for several years, and with major new releases (9.0), it is common to end support for older versions. We always supported one “mainstream” version and an older “legacy” version simultaneously. This means that once memoQ and memoQ server 9.0 is released, support for version 7.8 will no longer be available.


IMPORTANT NOTICE: If you wish, you can alternatively upgrade to memoQ or memoQ server 8.7, which will be supported until the end of 2019!

memoQ 9.0 and its following releases will not be compatible with 32-bit Windows

memoQ 9.0 and its following releases will not be compatible with 32-bit Windows, which means that if you haven’t already, you should upgrade to the 64-bit version of Windows if you wish to use 9.0.


IMPORTANT NOTICE: There is no need to panic! If you wish to postpone your Windows upgrade, memoQ 8.7 can still be used on 32-bit Windows and will be supported until the end of 2019.


How can I upgrade my Windows from the 32-bit to the 64-bit version? Click here!

As a result, the following Windows versions will no longer be supported:

If you don’t have .NET Framework 4.7.2 currently installed, ensure that your Windows Update is enabled. Please note the following:

If you are operating with a Windows version that doesn’t allow you to install .NET 4.7.2, you will need to upgrade your Windows operating system.
memoQ users are advised to upgrade nevertheless, considering that Microsoft has already stopped supporting versions mentioned above.

How can I determine which .NET Framework version is installed on my computer? Click here!


memoQ cloud customers must prepare to upgrade memoQ clients to 9.0

On July 1, we will start the roll-out for all cloud centers, and it will take 3 days to have all memoQ cloud server instances upgraded to version 9.0. For maximum compatibility, memoQ clients will have to be upgraded to memoQ 9.0 as well, especially for project manager users. Therefore, if you are a memoQ cloud customer, make sure that the PCs of your project managers meet the system requirements of memoQ 9.0. Also, be prepared to upgrade them to 9.0  after the 9.0 release.

.NET Framework 4.7.2 will also be a system requirement for memoQ server 9.0


Supported versions after the 9.0 release

memoQ and memoQ server 8.7 will be supported until the end of 2019. Version 9.0 will be an LTS (Long Term Support) version. LTS is a new concept: it means that every year, at a predictable, scheduled time, we will produce a feature release that will be supported for 15 months.


To be more transparent, please see clarification below:

Right-click the Windows button on the taskbar, normally in the lower left corner of the screen. Click System in the menu. In the System window, you’ll see this information in the “System type” row.

Unfortunately, you can’t directly upgrade Windows from 32-bit to 64-bit: your operating system needs to be reinstalled from a 64-bit installer. If you need help with reinstalling Windows on your PC, ask your system administrator or an IT professional.