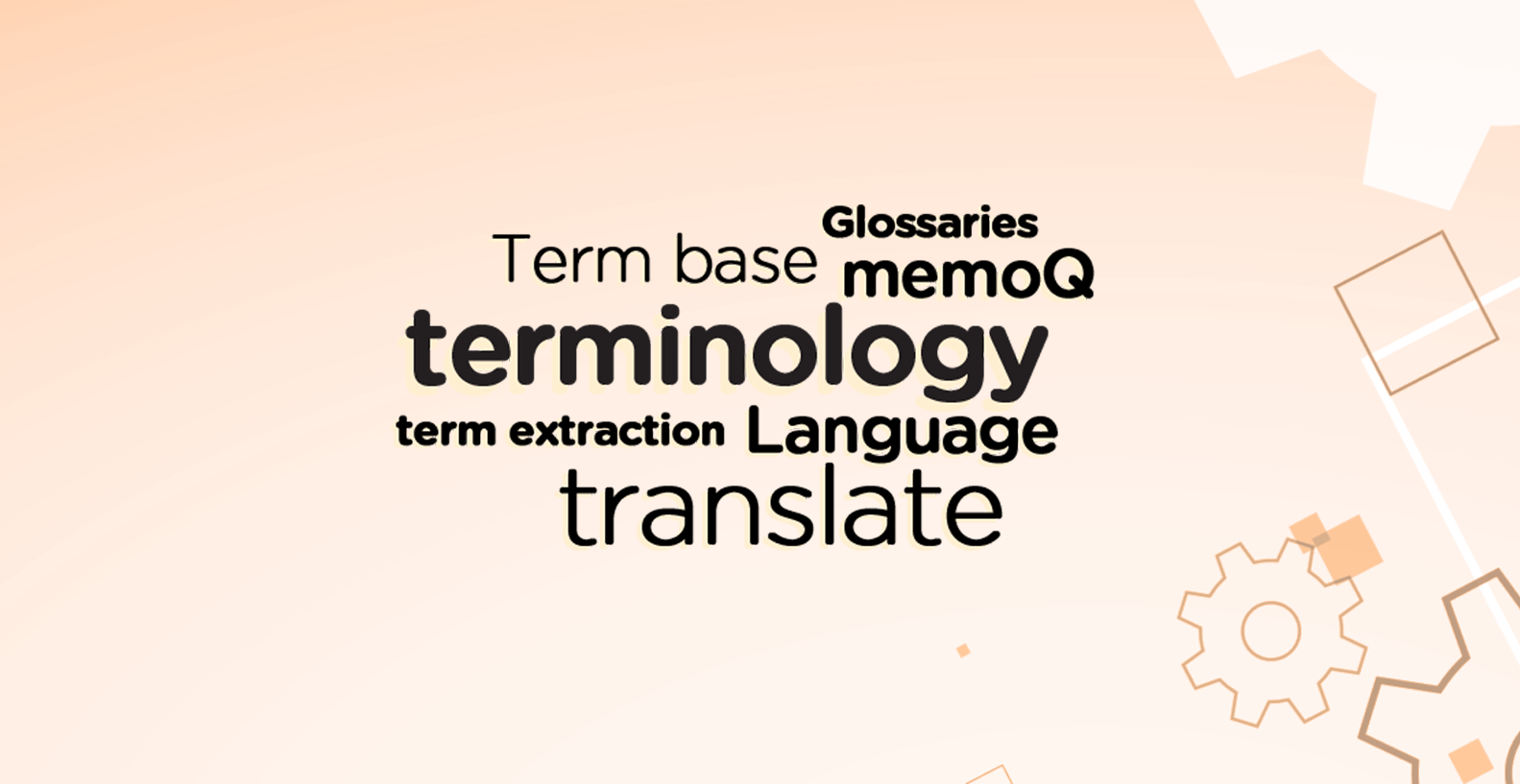 Terminology is the Cinderella of translation technology. Everyone knows that it is important and using it effectively will mean better quality and more efficient translation work.
Over the last ten years, there has been a significant increase in the number of machine translation vendors and CAT tool and translation management system vendors but relatively few companies are offering terminology solutions. There are some notable exception such as TermWeb from Interverbum, Coreon from ESTeam and Tilde’s Terminology solution powered by TaaS. While I would argue that Kilgray has never ignored terminology, I accept we could have done more. With the release of memoQ 8.3 we are introducing some important changes. Almost all the terminology improvements in memoQ 8.3 are based on user suggestions or requests. Thank you to all who sent in their ideas. We appreciate your feedback! 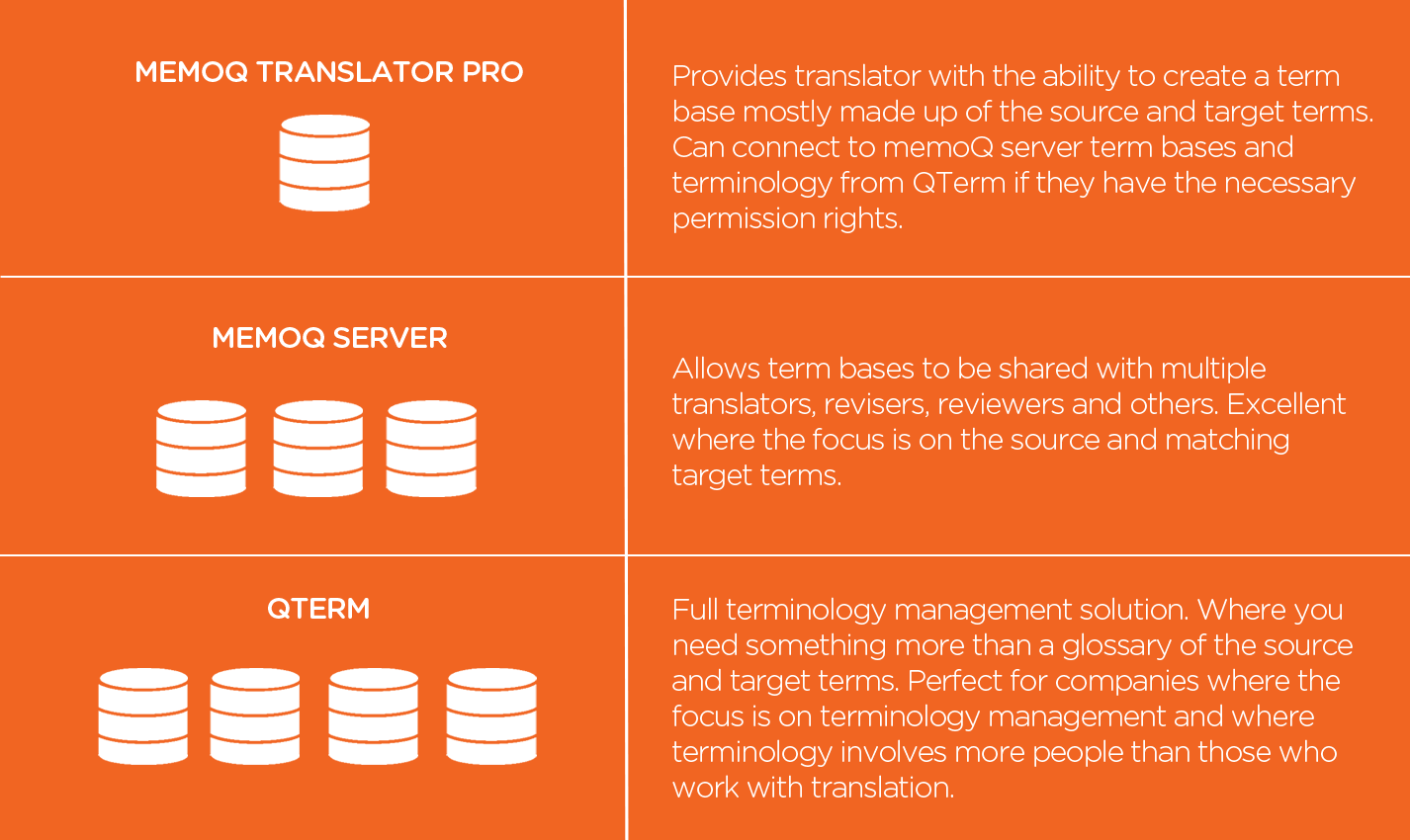 I would like to start by mentioning the terminology functionality which memoQ and QTerm offer. The diagram above illustrates this. In memoQ translator pro, you have a term base which translators can use to manage terminology during work. They can also be given access to a memoQ server term base or to QTerm. Typically, they would have the rights to view terminology and could suggest candidate terms that need to be approved before anyone else see them.

With memoQ server, we have term bases which can be collaboratively used by all those working in the project. The main focus of terminology work in translation is to ensure that terminology is used consistently, that certain terms are always left untranslated and other terms are never used – forbidden terminology. memoQ translator pro and memoQ server offer this terminology functionality out of the box.

The reason you would need QTerm is that your needs go beyond the management of source and target terminology, forbidden and preferred terms. This could be an LSP offering terminology as an added value service to their client or an enterprise where marketing, content creation, and product development all work with terminology as well as the translation department.
QTerm allows you to develop a customizable and scalable term bases. If you have previously used another terminology management system that uses TBX or MultiTerm formats you can recreate the structure of the term base as well as import the terms. You can use the QTerm portal for sharing, discussing and managing terminology.

With the memoQ 8.3 release, there are exciting changes to the terminology management functionality in memoQ and in QTerm. These changes concentrate on improving the user experience.

memoQ has had terminology extraction functionality since version 3.0 of the software which is seven or so years ago. memoQ 8.3 is the first version in the last few years where we bring in significant improvement.

Term extraction takes documents, LiveDocs corpus, and translation memories and extracts a list of candidate terms from them. You can then review the candidate list in memoQ and decide which you want to accept as terms.

With memoQ 8.3, it is also possible to export this list to an Excel workbook and share it with others. There are changes to the term extraction ribbon which make the job of managing the candidate list easier. The new ribbon is much easier on the eye and we believe it will improve how you work with the candidate list.

Other improvements with term extraction are the new length column which allows you to filter by the length of characters in a term, and the possibility to add example sentences for both source and target terms.

The easiest way to illustrate the improvements to term bases in memoQ 8.3 is to show you two screenshots of exactly the same term, one being from memoQ 2015 and the second from memoQ 8.3

Here is the memoQ 2015 terminology pane. 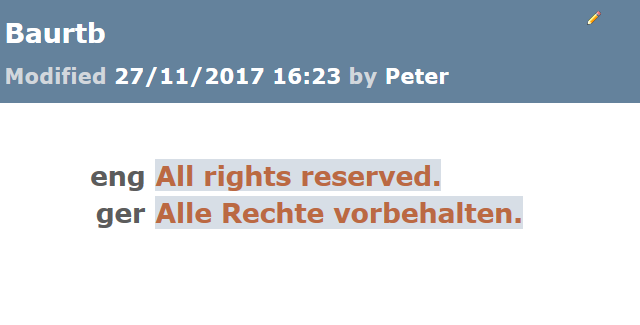 You can see how the memoQ 8.3 pane is both better presented and more user-friendly. Prior to memoQ 8.3 adding examples to term base was according to user feedback “a real pain in the neck”. It is now possible to simply click on a link to add an example from the currently active segment or from a concordance search. 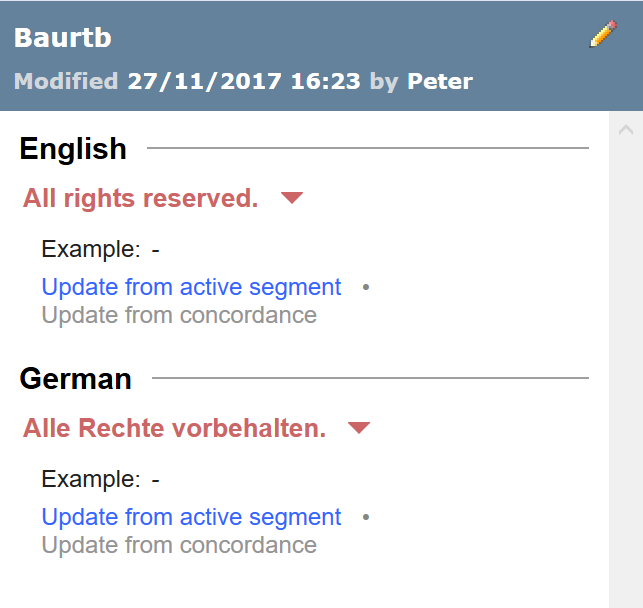 memoQ 8.3 allows you to export your term base directly to Excel. This makes it very easy to send the term base to a non-memoQ user for validation.

The changes to terminology in memoQ 8.3 are not just confined to memoQ itself. QTerm gets some significant improvements.

The print glossary feature has been redesigned and it is now customizable and editable. You can now select the metadata to include in your glossary and are able not only to print a pdf but also an RTF document. This RTF document uses formatting styles to help users further customize the look of their glossary.

As with memoQ, it is now possible to directly export your QTerm term bases to Excel. Terminology can also be imported from Excel.

Among the user interface improvements are better sorting options. You are also able to display more items on a single page and term bases can now be renamed.

Thank you for taking the time to read this post. I hope you will soon enjoy the benefits of the terminology enhancements in memoQ 8.3. As I mentioned earlier most of the inspiration for this comes from user feedback and thank you to everyone who contributed. Both the Kilgray team and memoQ users have many more great ideas so expect more improvements to terminology management in the not so distant future. 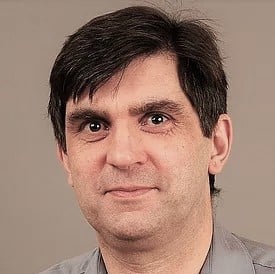